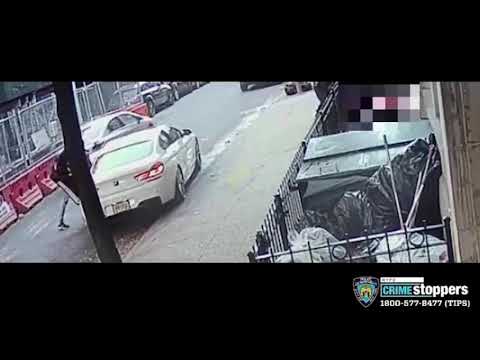 Keep me motivated by donating to https://paypal.me/thisisbutter Viewer discretion is always advised when watching this video or any others videos. I do not take any responsibility to your trauma, psychological and/or mental harm. I do not recommend anyone to attempt, act/reproduce, and/or create hate from what you see in this video or any other videos. Surveillance video caught the shocking moment a motorist deliberately drove his car on to a Manhattan sidewalk and crashed into a father and his eight-year-old son. The crazed driver of the BMW then jumps out of the vehicle and slashes the father’s throat, authorities said of the incident in Harlem earlier this month. The father and son were pushed into a gate by the impact and rushed to a hospital and treated for non-life threatening injuries, cops said. A BMW is seen in the footage, released by the NYPD, darting out of traffic and plowing into the dad and his child on West 112th Street near Adam Clayton Powell Jr. Boulevard in Harlem about 3.45pm on November 6. A person who narrowly misses getting hit by the white car runs off. The driver wearing a black shirt and another man wearing red hoodie jump out of the car and run to where the dad and his son have been pushed into a gate. Both return to the vehicle, but this time the driver switches over to the passenger side of the car. Passersby rush to help the victims as the vehicle speeds away. Cops say the father has nine previous busts for crimes such as robbery and grand larceny.

Robert Davi Clip: The press today acts not like honest journalists but as VULTURES they are Marxist Vultures who want to pick Donald Trump to death

The press today acts not like honest journalists but as VULTURES they are Marxist Vultures who want to pick @realDonaldTrump to death while they ignore the Marxist subversive destruction of AMERICA – We must stand...

Being taken care of sounds great — until all of your liberty is gone. pic.twitter.com/Z3xXLE6Wg6— PragerU (@prageru) August 8, 2020

When a weak government is near collapse. Lebanon right now…. multiple clips

Tom Fitton: Sally Yates and James Comey Have Faced No Real Punishment – Where is the Accountability!?

Wall to Wall: Stephen Moore on July Jobs Report. Third most jobs than any month in history…

Is Trump Setting a Trap for the Democrats? Dan Bongino

Oprah is either profoundly stupid or she is lying. No other choices.