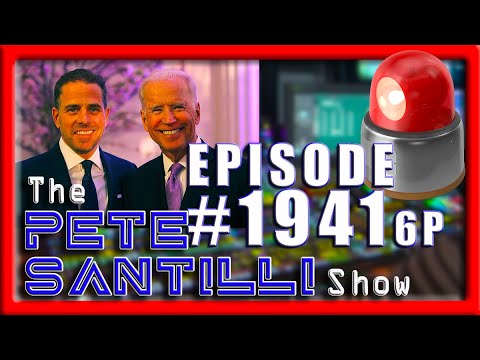 2 BOMBS: Senate Approves Subpoena On Hunter Biden Inquiry & WH Counsel Advised Susan Rice 1941-6P A Senate committee voted to approve a subpoena for its Republican-led investigation into Burisma Holdings, the Ukrainian energy firm that once employed Hunter Biden as a board member. By a party-line, 8-6 vote on Wednesday, the Senate Homeland Security Committee greenlighted a subpoena for Blue Star Strategies, a Democratic public relations firm. Blue Star Strategies represented Burisma Holdings, the Ukrainian gas company that employed Biden on its board while his father, former Vice President Joe Biden, was leading the Obama administration’s Ukraine policy. 2 BOMBS: Senate Approves Subpoena On Hunter Biden Inquiry & WH Counsel Advised Susan Rice On Email – The Pete Santilli Show http://ow.ly/csbk30qHWfY GUEST: Judge Roy Moore is a life-long Alabamian and a committed constitutional conservative that has stood up for liberty and religious freedom his entire career. Judge Moore was overwhelmingly re-elected by a vote of the people of Alabama as Chief Justice of the Alabama Supreme Court in November of 2012 and took office in January of 2013. In 2016, Judge Moore was suspended for upholding the sanctity of marriage as between one man and one woman. He retired to seek the office of U.S. Senate in 2017. Judge Moore and his wife, Kayla, have four children and five grandchildren. They are members of First Baptist Church in Gallant, Alabama.

Photo: Kaepernick Needs Our Help. Let’s take a knee, march, riot… all so he can… what?

Someone please save Colin Kaepernick from all this oppression!😭 pic.twitter.com/1HdWwg9R9T— Rogan O’Handley 🇺🇸 (@DC_Draino) July 6, 2020

What the hell, jokers? We’ve all seen this done to humans, but a dog? How is it so funny to these people? Fast clip 3 secs

What the hell is going on here – bad police abuse vid? Holy Crap… Man in a car that is parked in his driveway. Shot dead on video. Looks bad

My friend’s cousin was killed today while sleeping in his OWN driveway by Phoenix PD. He was unarmed and shot at close range. Please share so we can get him justice. #justiceforjames pic.twitter.com/5C9CupUmqi—...

Photo: Kaepernick Needs Our Help. Let’s take a knee, march, riot… all so he can… what?

See this. Share it. Human Events Editor has some sweet picks. This is one. Man is totally right.

Humor-Satire: The couple that saved their home with the AR15 and pistol… fast cartoon